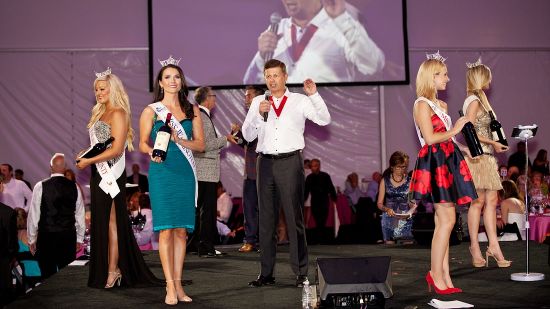 WOODINVILLE, Wash. –The 29th annual Auction of Washington Wines raised more than $3 million last weekend, including $1.9 million in live bids, during three days in Woodinville. At least 50 percent of all proceeds will benefit the Seattle Children’s Hospital and the Viticulture and Enology program at Washington State University. The event has raised more than $37.5 million since Allen Shoup, onetime CEO of Ste. Michelle Wine Estates, helped create it in 1988.

Sherri Swingle, the auction’s executive director, credits the weekend’s success to bolstered event planning, a greater selection of live lots and a heavier focus on bidder development. “And of course,” she added, “our wine region is one of the best in the world.”

On Thursday, Château Ste. Michelle kicked things off as host of the Picnic & Barrel Auction, and later that evening five winemaker dinners at private homes in Puget Sound celebrated local vintners. Luminary chefs such as Garrett Melkonian of Circadia (expected to hit the Seattle restaurant scene later this year) and Ben Godwin of RN74 Seattle, a Wine Spectator Best of Award of Excellence winner, partnered with Washington wine stars like Andrew Will, DeLille Cellars, Gramercy Cellars and Reynvaan Family Vineyards.

At the Saturday night Winemakers Gala, the highest-earning lots were all experience-based. “This year we had more holiday and lifestyle lots,” said Swingle, “but our wine-only lots did better than in prior years.” Those lifestyle lots included the top lot, the “Antinori Trip to Italy,” a weeklong trip with winemaker Bob Betzthat went for $100,000; a two-person ticket for a VIP Kentucky Derby experience, sponsored by 14 Hands Winery, fetched $35,000.

By Samantha Falewée at Wine Spectator on August 25, 2016